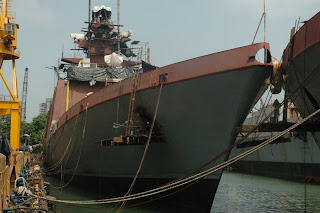 Indian Government constantly reviews the security environment and decides about induction of appropriate defence equipment/platforms, including various kinds of ships/submarines for the Navy.
Major warship construction projects of the Indian Navy running behind schedule include Project-15A (P-15A) and Project-17 (P17). The cost escalation in these two projects has been about 225% and 260% respectively.
The major cost escalation & delay has been due to uncertainties associated with the complex warship building process. Reasons for delay and cost escalations in respect of P-15A and P-17 are as follows:
P-15A: The main reasons contributing towards cost escalations are - delay in supply of warship building quality steel by Russia, escalation due to increase in expenditure towards services of Russian Specialists on account of inflation during the build period, impact of Wage revision due from October 2003 and finalization of cost of weapons and sensors.
P-17: The main reasons contributing towards cost escalations are - delay in supply of warship building quality steel by Russia, delay in acquisition of weapon equipment from Russia, and delay in finalization of propulsion equipment in view of complex combined diesel and gas arrangement introduced for the first time in Indian Navy frigate.
A contract was signed with Rosoboronexport, Russia in 2006 for acquisition of three Talwar Class follow-on ships and the delivery schedule for these three ships was April 2011, October 2011 and April 2012. Rosoboronexport has intimated that the delivery of the ships would be delayed as follows: 1st Ship - 12 months, 2nd Ship - 11 months and 3rd Ship - 14 months. The contract for acquisition of these three ships is a fixed price contract.
A programme for construction of six Scorpene submarines is currently underway at M/s. Mazagon Dock Limited (MDL) under Project- 75. As per the contract, the 1st submarine was scheduled to be delivered in December 2012 and thereafter, one each every year till December 2017.
There has been delay in this project due to initial teething problems, absorption of complex technology, augmentation of MDL infrastructure and procurement of MDL Purchased Material (MPM). The 1st submarine is now scheduled to be delivered in the second half of 2015.
Acceptance of Necessity for acquisition of Six Submarines under Project-75 (India) has been accorded by the Defence Acquisition Council. The proposal is being progressed.
A modernization programme has been initiated for the existing submarine fleet and a number of platforms have already been modernized. The programme has been worked out by the Navy catering to the obsolescence/non- supportability of system/equipment and to include contemporary technology.
During the last five years, construction of three ships under P-17, three ships under P-15A and four ships under P-15B has been assigned to MDL. The 1st ship and the 2nd ship under P-17 have been commissioned in April 2010 and August 2011 respectively and the 3rd ship is expected to be commissioned in early 2012.
The three ships under P-15A are scheduled to be delivered by March 2012, March 2013 and March 2014 respectively. Contract for four P-15B ships has been signed in January 2011, with delivery schedule as July 2018, July 2020, July 2022 and July 2024 respectively.
There is no proposal at present for creation of MDL facilities at Mangalore.
This information was given by Defence Minister Shri AK Antony in a written reply to Shri K Shivakumar and others in Lok Sabha today.
Source: PIB (Press Information Bureau Government of India) PIB is allows the Material featured on its website to be reproduced without any prior approval.