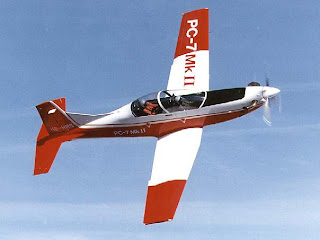 Indian Air Force is getting ready to make its final decision on the purchase of 75 basic trainers to modernize its trainer fleet and replace its 114 ageing piston-engined HPT-32s and 137 Kiran-I & II aircraft.
This deal for 75 basic trainers will be worth Rs 2,900 crore $ 719 million. Indian government is is in the final stages of making a decision about the winner of the contract.
Swiss Pilatus PC-7 turbo basic trainer is considered as front runner in the competition due to its lower over all cost. Other participants include American Hawker-Beechcraft's T-6C Texan-II and South Korean Aerospace's KT-1.