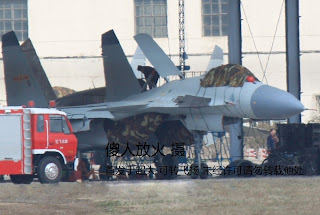 The J-15 Flying Shark is the Naval fighter jet developed to be used on the Chinese aircraft carrier. J-15 has folding wings, shortened tail and bulked-up landing gear to meet the requirements of landing and takeoff from an aircraft carrier. It is being produced at the Shenyang plant in northeast China. 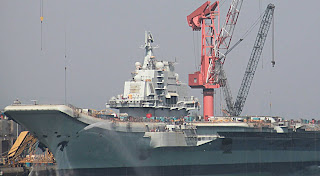 Few weeks ago new pictures of the aircraft carrier also appeared on the Chinese internet blogs and forums.
Both aircraft carrier and the J-15 Flying Shark are likely to be operational by 2015. China purchased Soviet aircraft carrier Varyag which was still under construction when Soviet Union collapsed from Ukraine.

China has upgraded and refitted the unfinished carrier and once operational it will be named Shi Lang which is the name of the Chinese admiral who conquered the Taiwan in 1861.
J-15 is based on the Chinese experience of producing Su-27 versions under license. China is now producing advance version of the Su-27 under the name J-11B with locally developed avionics, radar, composite materials and weaponry.