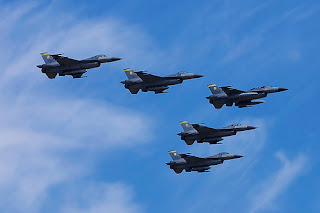 United States’ Secretary of State Hillary Clinton has confirmed that US will decide about the sale of new F-16 C/D Block 52+ fighter aircrafts to Taiwan by Oct. 1 this year. Taiwan has been making repeated requests for the purchase of new F-16 fighter jets to increase its defenses against the growing PLAAF.
United State has declined Taiwan's letter of request (LOR) for 66 F-16C/D block 52+ fighter aircrafts at cost of over $8 billion many times in the past few years because of the fear of strong Chinese reaction to such sale.
US have shown willingness to provide MLU upgrade package for the 146 F-16 A/B block 25 fighter aircrafts at cost of $4.5 billion.
With the Introduction of fighter aircrafts like J-20 stealth fighter aircraft, J-11B, J-15 and J-10B, China seems to be outpacing Taiwan not only in numbers but also in quality.
Taiwan’s air force operates 126 Indigenous Defense Fighters (IDFs), 56 Mirage 2000-5 MKII, 146 F-16A/B block 25 and about 60 very old F-5E/F Tigers. Taiwan has recently started upgrading 71 Indigenous Defense Fighters (IDFs).