Director General of the Defence Research and Development Organization (DRDO)m V.K. Saraswat has said that India is all set to test new short range, quick-reaction missile on July 17. This new quick response multi-barrel rocket system has been named ‘Prahaar'.
Prahaar quick-reaction missile will be able to strike targets at range of 150 kilometers. Prahaar is a guided missile which will be used by the Indian armed forces to fill the gap between short range unguided rockets like Indian 40 kilometer range multi-barrel rocket system, Pinaka  and 350 kilometer range Prithvi-II ballistic missiles.
Small diameter of the new tactical missile will allow six of them to be carried on a single launcher. This system is being developed as a cost effective, long-range guided artillery rocket system. 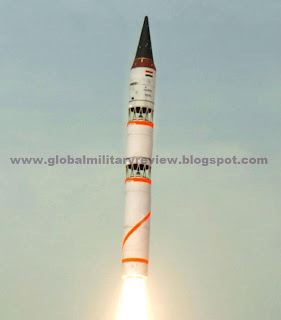 Chief Controller of the Missile & Strategic Systems, Avinash Chander said that all the three stages of the rocket motors of Agni-V missile has been successfully tested and missile will be tested as scheduled. India plans to test fire by the end of this year.
India to Test Agni-V ICBM by End of 2011
India Should Develop ICBMs with Range of 10000 km