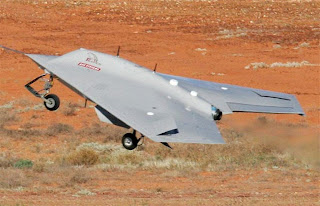 Iranian Islamic Republic News Agency has displayed an image of a stealth UAV with news item of Iranian forces shooting down the US RQ-170 Sentinel drone.
The credibility of Iranian version of the news is somewhat damaged as image displayed by the Islamic Republic News Agency (IRNA) is of the British Raven delta-wing UAV technology demonstrator for the Taranis unmanned combat air vehicle program.
Images of the wreckage of the RQ-170 Sentinel Stealth Unmanned Aerial Vehicle (UAV) which was shot down by the Iranian military can easily put an end to any doubts regarding the Iranian claim. So far no such image has been displayed but we will have to wait and see if Iranian military officials will like to have photo section with their catch.

The second question is regarding the Iranian claim that "The spy drone, which has been downed with little damage, was seized by the Iranian armed forces."

It seems highly unlikely that a drone which was manufactured with the extensive use of composite materials was shot down and it suffered little damage. Can lack of damage to the downed drone indicate that RQ-170  Sentinel wasn't shot down by using fighter jets or ground-based air defense systems and Iranian cyber warfare unit was responsible for the crash or its just that operators of the RQ-170 Sentinel drone lost control due to some technical failure and it crashed after it ran out of fuel?