RQ-170 Sentinel Drone Shot Down Over Iran or Lost Over Afghanistan? 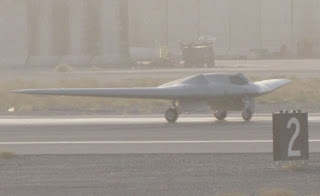 Iranian security forces has claimed that its shot down a  RQ-170 unmanned aerial vehicle of the United States after it violated the Iranian airspace. The RQ-170 stealth drone was shot down near the eastern border of the country by the  Revolutionary Guards.


Iranian military sources has said,"Our air defence and electronic warfare units managed to identify and shoot down an advanced unmanned spy aircraft - an RQ-170 - after it briefly violated the eastern border territory." The drone "was downed with slight damage. It is now under the control of our forces."

On the other hand International Security Assistance Force (ISAF) has said that they had lost control of a surveillance drone while it was flying over western Afghanistan.

ISAF officials has said "The UAV to which the Iranians are referring may be a US unarmed reconnaissance aircraft that had been flying a mission over western Afghanistan late last week. The operators of the UAV lost control of the aircraft and had been working to determine its status."

The RQ-170 Sentinel is a stealthy high altitude and long endurance drone which can fly at an altitude of 50,000ft. The The RQ-170 Sentinel  is a tailless flying wing which offers very small Radar cross section (RCS) allowing it to fly near or inside the borders of other countries without being detected.

It was designed to perform  intelligence, surveillance, reconnaissance and target acquisition (ISTAR) missions and provide real time information including imagery or videos to the ground stations.