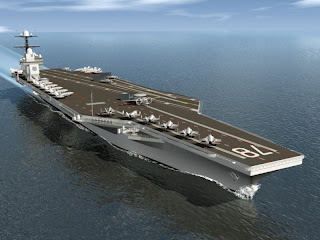 The fire on under construction aircraft carrier, HMS Queen Elizabeth has been extinguished and now under control, It will have no effect on operations at the construction site officials have said.

Over forty firefighters took part in the firefighting operation which may have started due to a "small piece" of smoldering material around the stairwell of the 8,000-tonne hull middle section of the Queen Elizabeth aircraft.
Official said, "We can confirm that, as a standard precaution, employees and contractors in the immediate vicinity were evacuated. No one was injured during this incident and employees are now back working normally. "This has had no consequences to operations here at Rosyth."