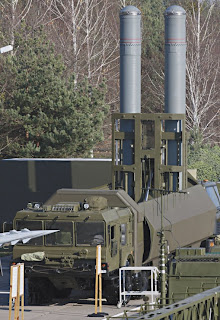 Russia has delivered Yakhont SS-N-26 supersonic anti-ship missiles as part of its deal to supply two Bastion coastal missile systems to Syria.
Each battery of the Russian Bastion missile system consists of 18 land-based mobile launchers carrying 2  Yakhont SS-N-26 supersonic anti-ship missiles to destroy enemy warships and ground targets. Russia has supplied a total of 72 supersonic missiles under a deal worth $300 million.
Russian sources has said that deal to provide 72 supersonic antiship missiles to Syaria "was completely fulfilled, almost ahead of time."
The Yakhont SS-N-26 anti-ship missile has a range of 300 km at speed of 2.6 Mach when it cruises at 14000 meters as part of its high-low trajectory and its range decreases to 120 kilometers at 1.5 Mach when used in a low-low trajectory.
The Russian navy is also sending its Admiral Kuznetsov  aircraft carrier along with other warships to Syria during their 2 month Mediterranean tour.
Officials from United States and Israel had repeatedly asked their Russian counterparts to reconsider the Yakhont deal with Syria, but Russians had rejected their fears that these missiles could fall into the hands of terrorists.
The Yakhont SS-N-26 supersonic anti-ship cruise missile is the Russian export version of the P-800 Oniks , a modified version of which has also been sold to the Indian armed forces under the name of BrahMos. A joint venture firm, BrahMos Aerospace Private Limited is responsible for the development and delivery  of the Bahmos cruise missile to the Indian Army and Navy.